Why Beveled Canvas Stretcher Frames Are Best: An Oil On Canvas Case Study 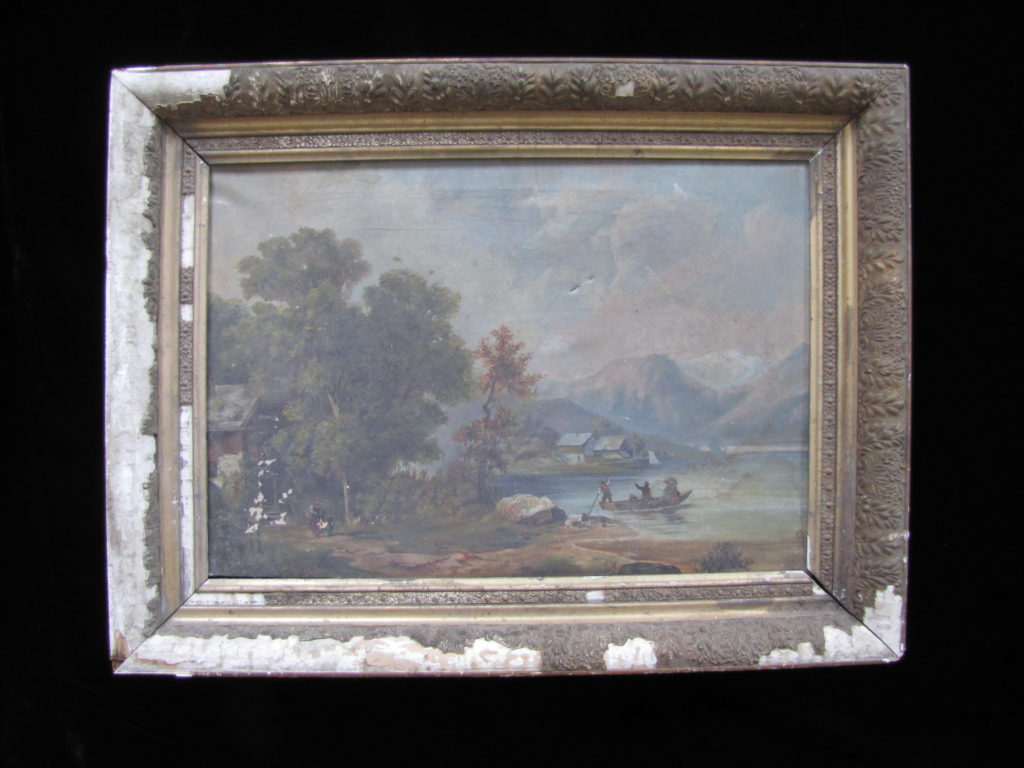 Last year, I was asked to consult on a 16 ½” x 25 ⅜” painting that had suffered extensive damage from improper storage and neglect. Found in a cellar half-buried and covered in dirt on the family’s farmstead, this oil on canvas had one previous owner. The artist is unknown, but the painting has great sentimental value as a family heirloom (and a mysterious one, at that!).

On inspection, I found a number of issues including lifting and flaking paint media, heavy soiling, punctures and tears, canvas buckling and slack. The top left corner had buckled and as you can see in this photo, a stretcher mark had appeared across the top of the artwork. 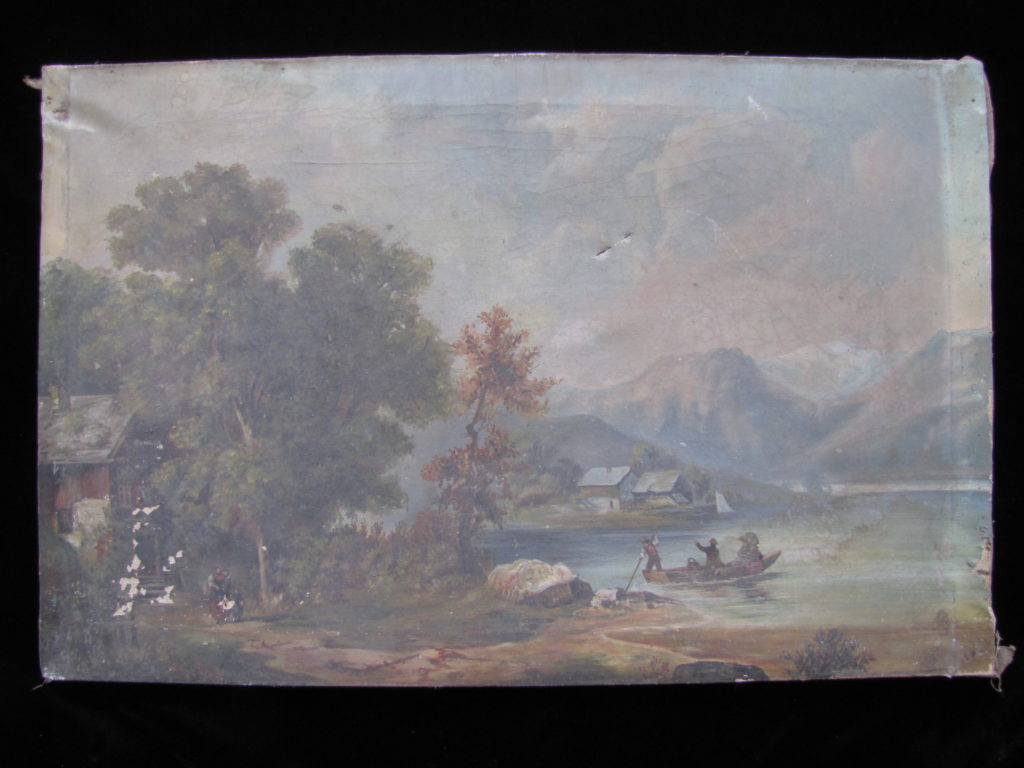 The oil on canvas after removing the frame; note the stretcher marks caused by the flat stretcher bars.

WHAT ARE STRETCHER MARKS AND HOW ARE THEY CAUSED?

Caused by flat stretcher bars coming in contact with the canvas, a stretcher mark is characterized by cracks in the paint. The worst and most visible damage happens right at the innermost edge of the stretcher bar. It’s a type of preventable damage I see most often with older paintings, particularly those dating prior to the 1960s and 70s.

A canvas might also touch the stretcher bar if the tension is not maintained over the life of the painting. This is where a second stretcher bar feature is critical: canvas stretchers must be keyable, as well.

As you can see, this particular painting frame had neither beveled bars nor keys. 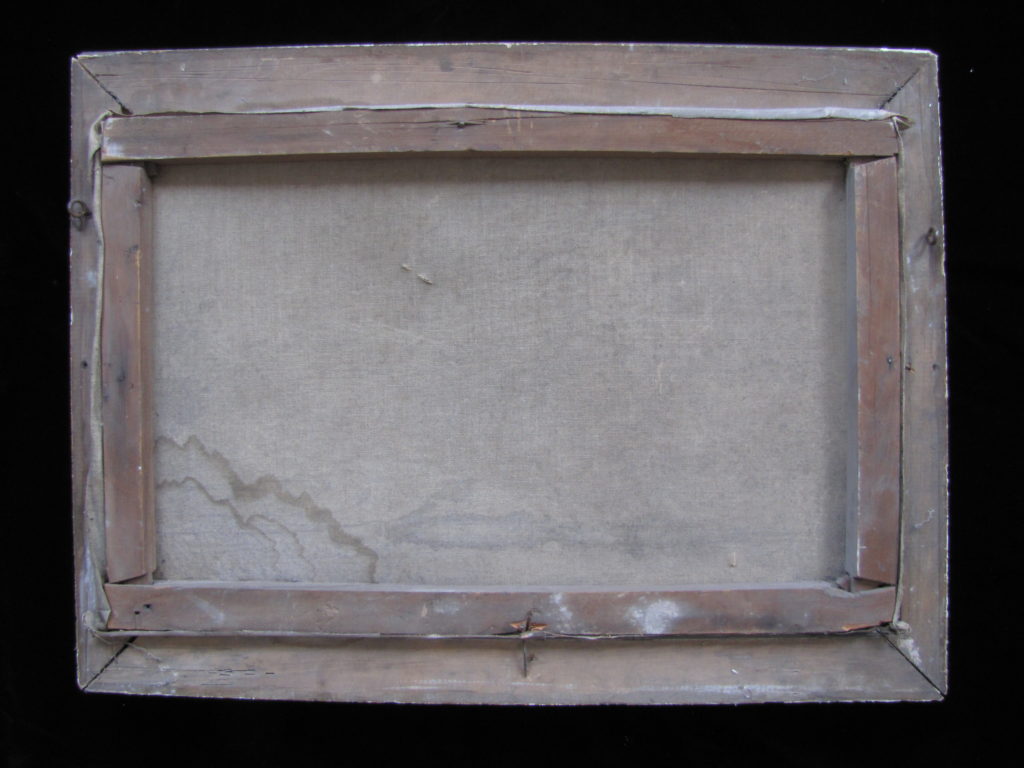 The back of the frame, with flat/warped stretcher bars in contact with the canvas.

Even today, the “value” stretchers you buy at a craft store often aren’t beveled or keyable. Artists who use flat stock lumber to construct their own stretcher bars might also make the mistake of not adding a bevel.

Here’s a close up of another stretcher mark on the left side of the painting. In fact, the paint surface was cracked at the stretcher edge around the entire painting. 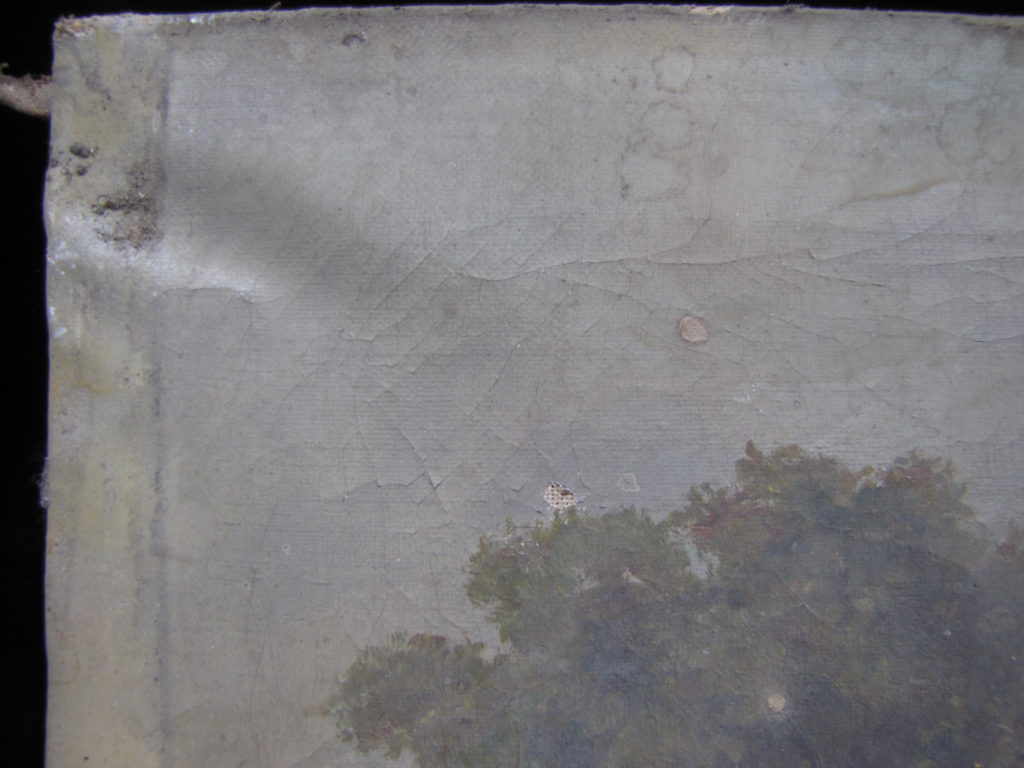 Canvas buckling caused by the use of a flat frame lacking keyable corners.

The process of cleaning and flattening can greatly improve the appearance and condition of the piece, but the creases and cracking caused by a flat stretcher bar are often permanent damage.

BRINGING A NEGLECTED PAINTING BACK TO LIFE…

The restoration began with a thorough cleaning of the canvas. I removed the frame and used soft, dry brushes to loosen surface soil. Because the painting was actively flaking, some areas were consolidated with an adhesive prior to cleaning with an aqueous solution.

I viewed the painting under UV light to identify the presence of a varnish, which was then removed with the appropriate solvent to ensure I didn’t lift the paint underneath. At that point, I removed the painting from its original flat stretcher and placed it face-down on blotting paper. I vacuumed and cleaned the back of the canvas, then used moisture and heat to flatten it. 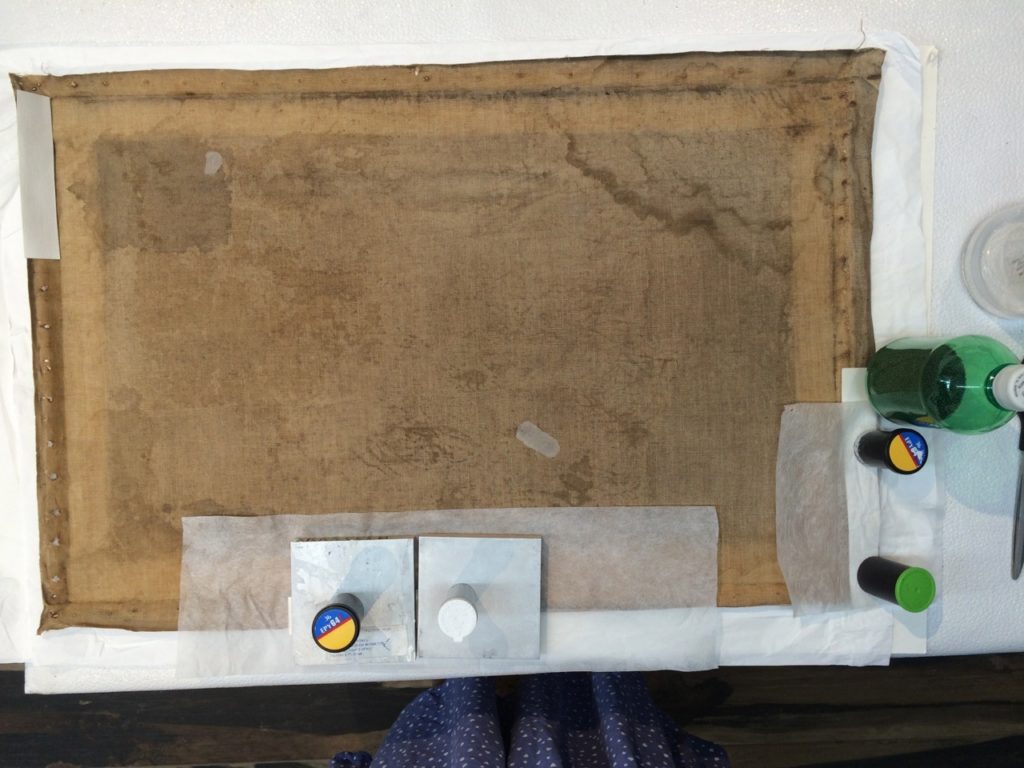 Flattening the canvas, in an effort to repair damage from the flat stretcher frame and years of neglect.

I was then able to position the canvas face-up and temporarily stabilize the flaking areas with Japanese tissue and a water-soluble adhesive. This made it stable enough for me to line the back of the painting.

Even with all of this intervention to flatten the painting, the stretcher marks caused by the stretcher frame remained, although they significantly reduced and are less visible. 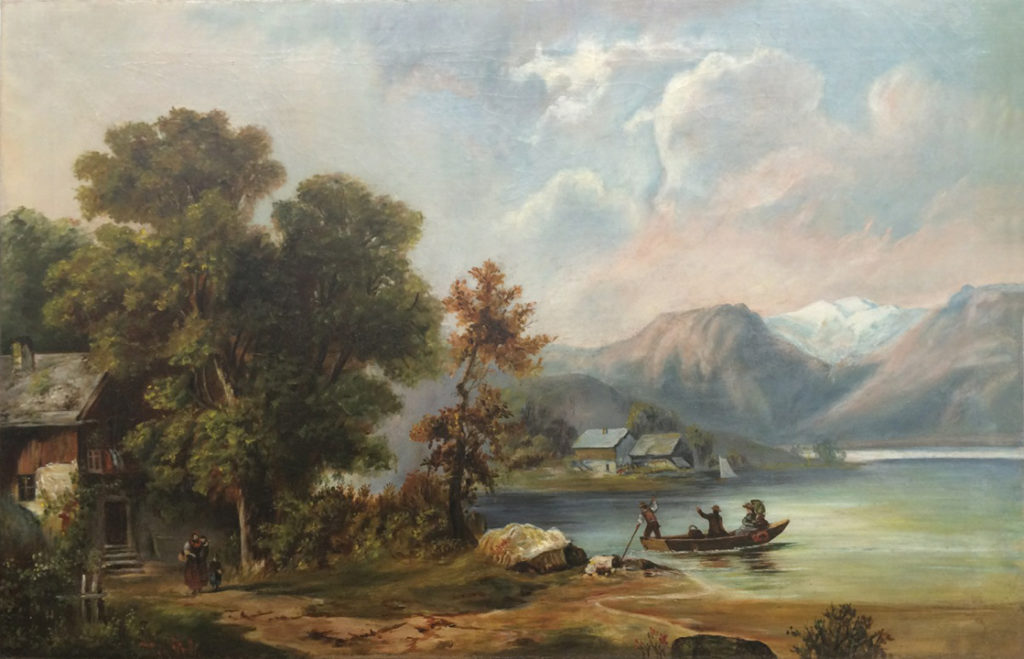 As you can see, stretcher marks can’t be completely removed, but can be made less visible with cleaning and flattening.

Upper Canada Stretchers crafted a custom stretcher frame for us (because this was not a standard sized painting) with their customary design features: a beveled edge and mitered, finger-jointed and keyable corners. Although this wasn’t oversized, we did add a brace for additional protection from punctures and ease of handling. 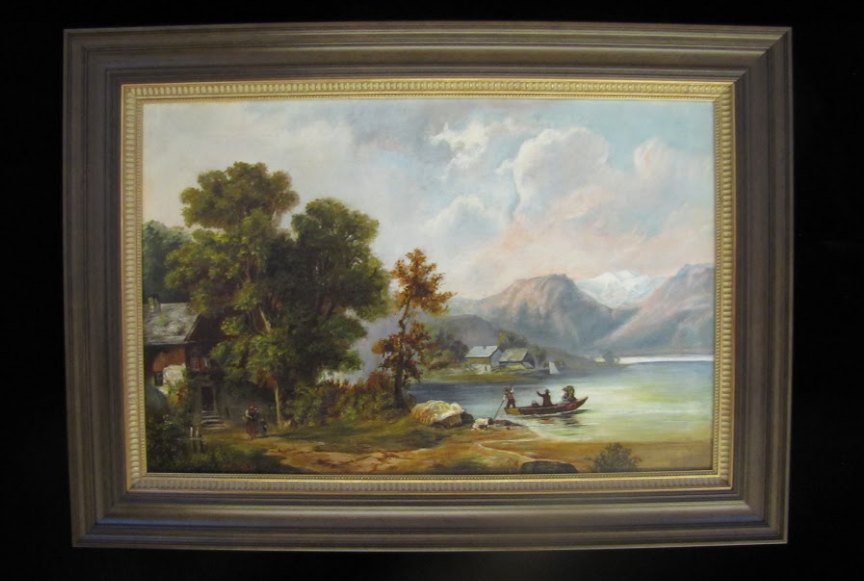 The restored artwork after re-stretching onto a custom stretcher from Upper Canada Stretchers and custom frame from Georgian Bay Art Conservation.

Today, this restored family heirloom has a place of honour on the living room wall at the family farmstead. The client wrote to me afterwards, “With so much damage, we doubted that anything could be done with it. The painting is so bright and full of light, and the images are clear and sharp. We will enjoy it for many years to come.”

SO HOW CAN YOU PREVENT THIS TYPE OF UNSIGHTLY DAMAGE IN YOUR OWN COLLECTION?

Prevention is absolutely critical. Always use stretcher bars that are both beveled and keyable to minimize canvas contact with the frame as much as possible. 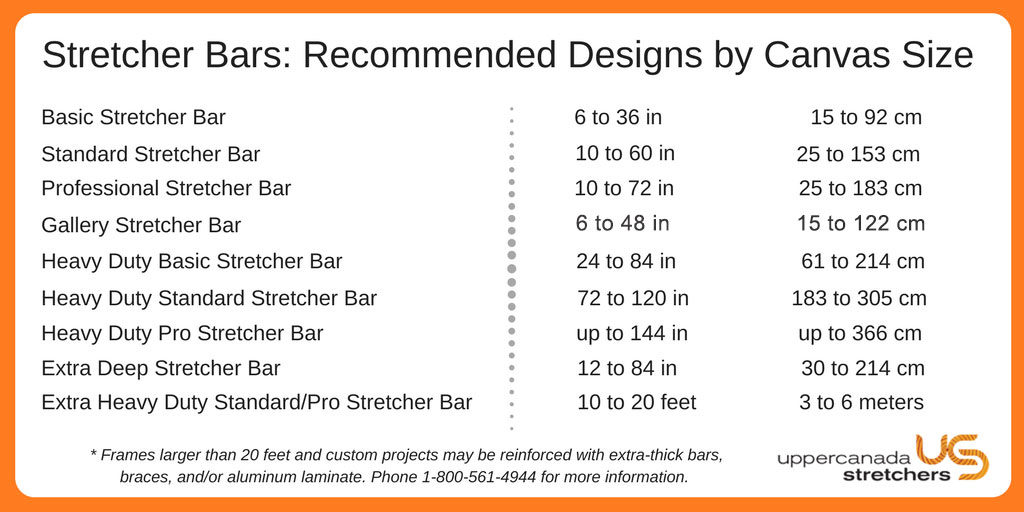 All of Upper Canada Stretchers’ bars have the beveled profile, and I’ve always found them incredibly helpful in determining the best solution for my stretching needs (which can be pretty unusual and have unique requirements!).

CAN YOU RESTRETCH YOUR WORKS TO STOP STRETCHER MARKS?

There’s no one-size-fits-all answer to this question, but re-stretching your canvas is one option. There are a lot of considerations to weigh: condition of the canvas, fluctuations in humidity, temperature, storage, and shipping all factor into the decision on how a piece on a non-beveled stretcher can best be preserved.

Taking all of this into account and depending on the condition of the canvas and paint, re-stretching over a beveled, keyable frame can at least mitigate further damage.

LOOKING TO ORDER ONLINE? WE HAVE CUSTOM SHAPED CANVASES!
SHOP OUR ONLINE STORE FOR ART SUPPLIES