An art reviewer once suggested in an article, “if you want to know what the artist is trying to express, the last person you should ask is the artist”. I tend to agree with this thought as I have always found it difficult to express in words what I am thinking visually. However, in todays texting world we do need to make an effort to outline some of what we believe we are trying to express. The following is my attempt to do this.

The symbols I (Robert Game) use have evolved from my own experiences traveling, kayaking, and spending many summers on Manitoulin Island in Ontario. I am not a big landscape aficionado, but I came to enjoy the play of light, the shadow forms, the spaces and all the colourful elements around me. I would take my camera and often my water colours. Over time I began to see more details in the landscapes around me. There is something of an emotional experience in just being there. On a visit Temagami, I learned from a local member of the first nations that outside the area of the lake the forests had all been clear-cut to Sudbury. At about that time environmentalists began to express their concerns and over the succeeding years the media has continued a more public and broader examination of environmental concerns.

In 2007 I began working on a series of paintings, the genesis of which was to express my concern for and bring attention to an ecological view of how our structures impose on our environment. The initial inception was to create the visual symbols that might express this and still retain my aesthetic of colour and form. This has since evolved through six different groups of work where each new set is a refinement or new emphasis of the visual symbols employed. I feel that painting becomes a self-teaching activity with each painting bringing new skills to use in the next painting and the visualization evolves from one series to another.

In several paintings I use Adobe Photoshop to reproduce historic symbols to illustrate or emphasis my ideas. Many of the architectural elements are my photos of Toronto edifices. The prints are then digitally transferred to the canvas and with a lot of over-painting are merged with other visual elements. These visuals are really quite simple, but represent important needs. The tree can represent the forest that even today is a source of resources for building, a food source, a shelter for both animal life and our own needs and much more. The sky delivers our oxygen and water. We build up our city structures on top of each other often leaving the ruins buried underneath or left for nature to take back and clean up for us. I try to express the need for balance between the natural and the urban world and our imposition on nature. In time, if we give the world a chance it will overtake the structures that are abandoned or left. Society must make an easy place for itself, not an imposition by force. 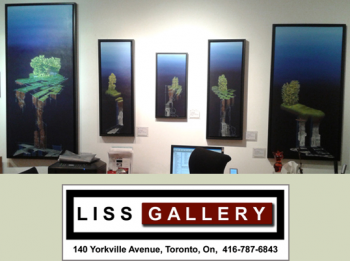 The last aspect has been that I want to have a finished piece of work that I find enjoyable to just look at, not an image that confronts or assaults the viewer.

This current exhibit of my most recent paintings is at Ferneyhough Contemporary gallery in North Bay, Ontario.  I have had the previous series there in 2007 and 2009. Many have also been shown at the Toronto Artist Project in 2013, 2014 and 2015 in Toronto, Ontario. At the David Kaye Gallery and Liss Gallery in Toronto.