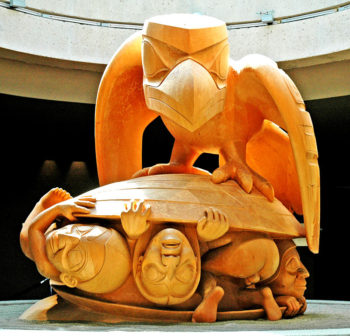 Vancouver’s art scene is bustling with established and emerging artists. Almost any night of the week, you can find an exhibit opening or event.  These 10 amazing and unique exhibits showing throughout the city this fall have something for everyone from photography, sculptures, interactive art and of course, paintings. Here’s 10 Vancouver Art venues that are as unique as the art itself featuring university campuses to intimate smaller galleries.

Museum of Anthropology at the University of British Columbia

This unique exhibition In the Footprint of the Crocodile man will showcase the most comprehensive collection of contemporary Sepik art in North America for the first time.

Mixed media by Cori Creed, Esther Rausenberg, Tracey Tarling and Richard Tetrault. This exhibition is the first in a series that will be shown in galleries across Canada on the subject of our environment and our threatened oceans and waterways.

Inventive artist Mila Karavai, presents a collection of illustrative works using unconventional surfaces such as paint, aluminum and papier-mache, that explore the transformation of an idea into a physical form.

Paintings by Stefanie Denz – In the relatively brief history of film, many glamourous starlets have graced the screen by relying on their youth and beauty. With the social change of the sexual revolution, gender power struggles and the dynamism it produced in culture became apparent in some movies in the 1960s and 1970s.

UNIT/PITT Projects
Joseph Staples’ work is a study of contemporary print and photography through collage. Garden of Paradise is comprised of six video loops, each consisting of two GIFs juxtaposed onto each other to form an intersection of movement, the animations finding alignment momentarily before drifting out of sync again.
GOOGLE MAP LINK:  236 E. Pender, Vancouver BC

There are five works of art in this exhibition. An exhibition that explores machine vision. The works examine interplays between the perceiving machine, the world that is perceived by the machine and we who are both perceiving + perceived bodies.

Meghann takes materials from the natural world and transforms them into remarkable pieces of high-level human expression. Working with traditional materials such as mountain goat wool and cedar bark has given her a deep connection to the supernatural world, a connection to her ancestors.

Examining the significance of the six women who were inspirational to his artistic development, Picasso: The Artist and His Muses is the most significant exhibition of Picasso’s work ever presented in Vancouver.