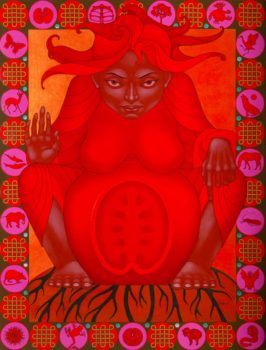 The stylized figures suggested alternate worlds of infinite possibilities. Ingrid’s natural inclination is to the surreal, the dream, the vision… and, for her, the form these take must have the rhythm and line of the natural world. Colours should be psychedelic.

On a ship to Brazil, when she was 6 years old, a sailor was kind enough to show her how to draw. The forms that grew from the end of his pen bewitched her. A childhood in Rio, with Carnaval’s wild exuberance, affected her deeply and permanently; as did the religious practices of Makumba, with its strange associative-magic rituals.

She studied drawing and painting at the Ontario College of Art when the art world was under the spell of abstract expressionism. Because of the times, artists that she was drawn to, such as Parmagianno, Pontormo and Gustave Klimt were frowned on as ‘’Mannerists’’ by some. She felt at home with the tension in these works. Then in 1995, the Symbolist Exhibition at the Montreal Museum of Fine Artswas a breath of fresh air and was hugely inspiring to her.

She starts, not with an idea, but a line: The line soon shows me what needs to be expressed. I do my best to follow it, riding my unconscious mind as one would a dressage horse … following the impulse but remaining in control.

The result almost always appears to be the human soul’s searching struggle for birth and release.

In 1984, The Portuguese poet Fernando Pessoa wrote:
Ah! How often my own dreams arise before me as things, not to replace reality, but to declare themselves its equal.

And of Style’s work, William Ronalds said:
These are fascinating drawings of fluid night visions brought taut in the daylight hours.

Ingrid presently lives and works at the foot of Mont St Hilaire, Quebec:
Below me flows the Richelieu River.
Over the years, I have heard all sorts of wonderful stories about this ‘magic mountain’ : rocks that feed the spirit, visits from extraterrestrial vessels, and that no crucifix can remain on its summit. 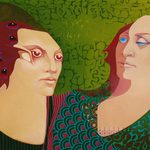 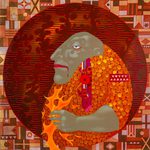 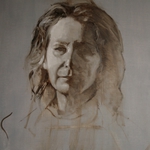 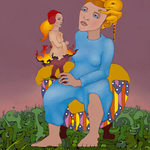 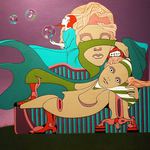 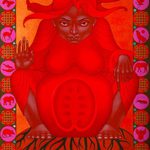 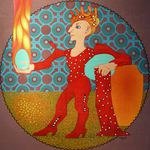 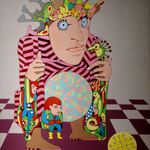