One of Croatia’s lesser known claims is that it is home to the world’s largest painting – and now the artist Djuro Siroglavic is giving Croatian Times readers the chance to own a piece of the record-breaking artwork. The painting, titled `Wave`, was classified as the largest painting in the world by the Guinness Book of Records last month measuring at a whopping six kilometres long. But now Siroglavic wants to make the most of the paintings fame by selling a small piece of it for charity. He said, “The painting became famous and I feel this is the moment when it can help children.

“I’ll cut a 140×70 cm piece of the painting that will fit on someones wall slightly better than the original.” The unique piece of artwork will go the the highest bidder and bids start at 150 Euros.

The complete painting is 6,400 metres long, over two metres tall and weighs about 5.5 tons. The painter and two assistants responsible for the painting worked on it from February until July last year at Zagreb`s Borongaj army barracks. They used more than 2.5 tonnes of paint in covering the painting’s 10,800 square metres. Once finished, the painting was placed along a fence at Brac airport on the Adriatic island of Brac, where a Guinness book of records representative examined it. Siroglavic is particularly keen to help those children in Croatia whose parents died or went missing during the Croatian Homeland War. He said, “It could also help other children in need.” 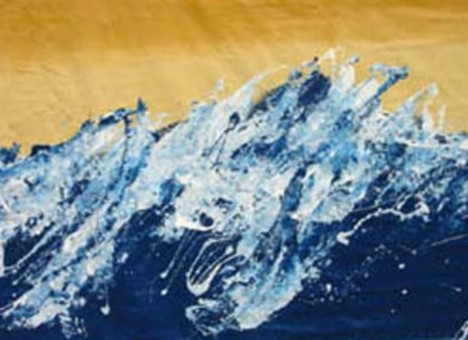