Looking at John Beerman’s work, I feel I am exploring the landscape of the Promised Land toward which we have always been walking. His oil depicted landscapes of America could be nowhere else yet are like nothing we have ever seen though we recognize them immediately, our seeing from now on will be colored by his immense craftsmanship, the land herself in layers of earth vegetation winds and sunlight layered here onto his canvases and finally for those lucky enough to own his work creating a corner of peace and revelation in that home in which they live. Standing in front of one of his works, I feel myself to be utterly my best self….

Some video and slideshows of my conversation with John:

Some of his paintings: 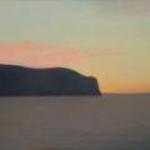 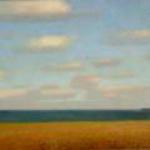 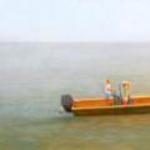 More about where his work can be found..

John Beerman is a painter whose work has been exhibited nationally and internationally. He attended the Skowhegan School of Painting and Sculpture and earned a BFA from the Rhode Island School of Design. Beerman has received numerous awards and fellowships including the Pollack-Krasner Foundation Award and the Yaddo Artist Colony Fellowship. His work is represented in many museums including The Metropolitan Museum of Art, New York; the Museum of Fine Arts, Houston; and the Whitney Museum of American Art, New York. He has completed several public commissions including a mural in the Craftsteak restaurant at the MGM Grand, Las Vegas and recently an eighty-five foot mural in the I.M. Pei designed Milstein Family Heart Center, New York Presbyterian Hospital in New York City.