The city of Detroit has been through some rough times but new life is evident lately, especially in the downtown core where office towers are being bought and renovated for new tenants.   An important part of this city’s resurrection is work being done by Jennifer Curis who is bringing new contemporary art installations to many downtown locations to add colour and beauty to an otherwise austere business environment.  A good example of this is the round, 19 foot diameter painting by Kelsey Brookes recently commissioned for the One Woodward Street office tower lobby named “Golden Mean” and it is a part of a series of paintings that explore the aesthetic quality of the mean ratio (1.62). Its the larges of the series.

THIS IS LIKELY THE LARGEST ROUND STRETCHED CANVAS PAINTING EVER PRODUCED, CERTAINLY IN NORTH AMERICA.

Kelsey Brookes spent over 4 months, with the help of two other painters, to complete this impressive painting. The canvas was painted while stretched and stapled to the floor of the artist’s studio in San Diego.

Meanwhile, Upper Canada Stretchers Inc., from Owen Sound, Ontario, were contracted to produce the round stretcher frame to support the 19′ painting. The unprecedented large size of this painting required that a new approach be taken for the design of the stretcher frame. CNC equipment was used to produce 9 curved sections, each comprising a lamination of 4 layers of birch and fir plywood. The sections were fastened together with flush-mounted hardware and fitted with eight aluminum braces to achieve a stiff, yet light, framework to stretch and support the heavy canvas.

On November 12th, 2016, all parties involved gathered at the Detroit office tower to install the painting on the south-facing white marble wall in the tower lobby. The stretcher was assembled and then placed on top of the canvas which was laid out on the floor, painting side down.  Given the large size and shape of the painting, a special stretching technique was devised by Upper Canada Stretchers in order to pull the canvas evenly and tightly around the full perimeter of the stretcher frame. Several ratchet straps were used with tarp clips to pull the canvas tight on the back side of the stretcher along 4 compass directions: N-S, E-W, NW-SE, NE-SW. The canvas in between these points was then stretched by hand and stapled to the frame.  Read this article if you would like to learn about how to stretch canvas.

With the help of two bucket lifts, eight strong workers, and a carefully thought-out plan, the 500-pound painting was gently raised and securely mounted to the wall using two custom-made gravity bars. 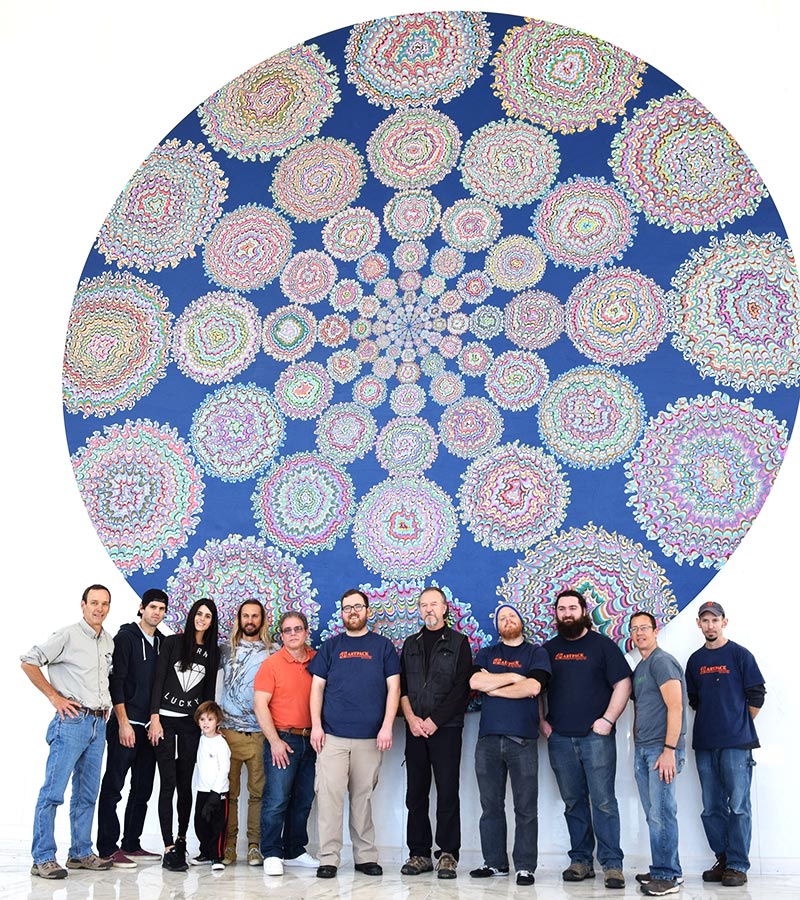 As we all stood back to take in the sight, the bright colours and round shape of the painting looked striking against the large, rectangular expanse of white marble walls throughout the lobby. The project was clearly another successful step in bringing life, colour, and softness to a downtown Detroit business district. Congratulations to all involved in pulling off this challenging project!