Some of his paintings: 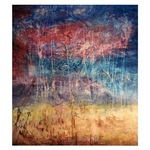 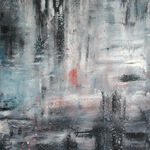 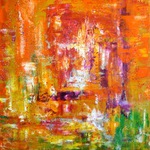 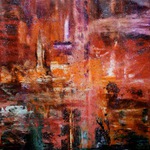 Click here for these paintings and the music with them…

Inspired by the spiritual power of music, Alexus’ paintings are his effort to transform this power into a visual experience. In his own words….one cannot understand the paintings with the rational mind because their inspiration comes not from rational thought but from the soul. When I talk about music, I do not mean just any music…but music that is in itself is divine. It is this feeling that I try to capture in my paintings.

Alexus received his primary and secondary music education in Kazakhstan, continuing to study new music and composition in Cologne, Germany after emigrating in 1978. It was the creative power of new music which was the impetuous for him to begin to pursue his passion for painting. After acting as an artist model for painters of high realism in Paris, he forged a mentor/student relationship with the late Master French trompe-l’oeil artist Jacques Portier. By the mid-eighties Alexus, a full time music teacher, was painting nights and weekends in his then underground studio in central Cologne. Before the end of the decade he would give up teaching and devote his energies full time to painting and exhibitions. In 1996 Alexus founded “Viva L’Arte” a Cologne based festival which commissioned new music composers accompanied by art. The festival ran seven seasons.

Meeting a Winnipegger visiting Cologne was the catalyst for Alexus’ first solo Canadian exhibition at the Canadian Mennonite University’s Heritage Gallery, in May of 2000. Curious about the Winnipeg Symphony Orchestra’s New Music Festival, he returned to Winnipeg for the 2001 festival. By the fall of 2003 he made Winnipeg his home, creating Alexus Studio/Gallery. The vision for the large underground space, outside of being a working studio and office, is to host intimate gatherings and concerts combining art and music. In 2005 Alexus was invited to participate in the WSO’s New Music Festival as “Artist in Residence” with his signature oversized paintings.

Some of Alexus’ major bodies of work include paintings inspired by the music of Perotin, Penderecki, Mozart, Fauré, Schnittke and Pärt. Recently the list has grown to include Gavin Bryars, Giya Kancheli and Lenoid Desyatnikov.

Professor Nancy Holland of New York writes: “ To create the [Schnittke] Requiem series, the painter absorbed the music for long periods of time-letting the music consumed him before he allowed his reactions to flow onto the linen canvas. The result, according to German author and critic Nelly Wacker, is an ‘indelible sensation of beauty and sublimity.’ She has written that only someone born with the soul of a painter and poet could produce works worthy of Schnittke’s grandiose music.”

Alexus has been featured in exhibitions in Belgium, the Netherlands, Luxembourg, Italy, Portugal, the United Kingdom and across Germany. In North America he participated in a miniatures competition in Quebec, and solo and group exhibitions in Manitoba and Alberta, as well as in Lincoln, Nebraska.