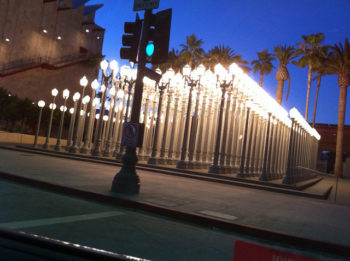 Many love public art as it inspires personal interpretation and becomes a form of a collective community expression. It can express community values, enhance our environment, transform a landscape, heighten our awareness, or question our assumptions. Los Angeles’ public art creates dialogue, informs public opinion and evolves with the local culture. Here are 10 public art displays in Los Angeles that you can’t miss!

“URBAN LIGHT” is an assemblage sculpture of 202 vintage street light standards from the 1920s and 1930s, with dusk-to-dawn solar-powered lighting

The Great Wall is a landmark pictorial representation of the history of ethnic peoples of California from prehistoric times to the 1950’s. One of Los Angeles’ true cultural landmarks and one of the country’s most respected and largest monuments to inter-racial harmony.

The gateway grows the visual language of highway infrastructure into an organic form at the scale of natural phenomenon. Aluminum “nodes” embedded with LEDs fixed to the canopy illuminate at night reviewing data collected of the daily vibrations along the bridge.

in front of the Japanese American National Museum,

A young girl swings from the word “PARK” within Banksy’s downtown Los Angeles mural. It may be a comment on how there is a lack of places for kids to play safely in what is a fairly rough area of LA.

“constructed  a dream-like complex of openwork towers . . . and encrusted them with a sparkling mosaic, composed mainly of what had once been refuse.”

An outdoor sculpture of gigantic proportions -at 340 tons, the boulder is one of the largest moved since ancient times.

Behind the Los Angeles County Museum of Art (LACMA)

Every inch inside and out of the house is covered in a rainbow of handmade mosaic tiles made by the artistic couple in their studios in the backyard.

A bigger-than-life pun that has become a beacon of altruism. The 18-foot wooden fork stands right where the roads split, literalizing the “fork in the road.”

Intersection of Pasadena and St. John Avenues in Pasadena, California

Calder’s sculpture is 63 feet tall and bright orangey red, so it stands out on Bunker Hill, where it sits in the Bank of America Building’s plaza.