A Pennsylvania painter immersed in his living habitat…

the large expansive dramatic beauty of the American wilderness, which he records with generous and utterly competent enthusiasm through his mastery of his craft… To me his paintings are filled with fresh air, I can practically smell and taste it.. His work is a doorway transporting me from the mundane space I’m standing into the great wild beauty outdoors we all long to be part of and so seldom can experience…

You can visit images of his work online here https://www.thomaspaquette.com/

I know you would be greatly rewarded visiting the actual paintings wherever you can…..

Some slideshows and recordings of my interview with him:

How Started
Media and Theme
How Evolving
Marketing 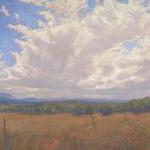 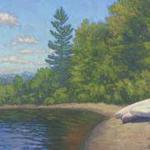 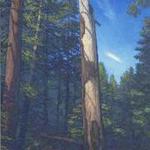 Thomas Paquette (b. 1958, Minneapolis) is widely known for his evocative paintings of nature. Since the late 1980s, his paintings have been featured in more than fifty solo exhibitions in prominent galleries and museums including shows in New York City, Chicago, Philadelphia, Minneapolis, Washington DC, and Maine. He is the recipient of several fellowships and honors, including artist residencies at the American Academy in Rome, at the Aegean Arts and Cultural Exchange (Greece), and at three U.S. National Parks (Acadia, Yosemite, Rocky Mountain). He was awarded a three-year residency-fellowship from the National Foundation for Advancement in the Arts, Miami, from 1989-91. From his studios in Maine and Pennsylvania, he completed several large public and corporate commissioned works. His paintings have also been selected to hang in sixteen U.S. embassies on five continents. He has lectured in the U.S. as well as in Greece, Wales and England. Paquette began painting full-time just after earning his Master of Fine Art degree in Painting from Southern Illinois University Edwardsville,1988, and now lives at the edge of the Allegheny National Forest in Pennsylvania.