A contemporary realist painter exploring the open-ended narrative; Steven Volpe lives and works from his home and studio in Orangeville, Ontario. His work reminds me that online pictures of paintings have the power to get through to me in an important way … not just mere photos somehow inferior to the original painting, and not better either of course. … It’s important to have original works of art on our wall, to live with, to come home to.

Many times we catch a glimpse—of someone or something “across a crowded room”—that, for an instant, stops time. … a moment in which we are disoriented from our previous instant and captured by this one, only to lose the sense, wishing we could grasp and hold it, but cannot, as the instant passes. Steven’s work captures those moments utterly; the sense of them, the subtle beauty and attraction of them, lets us hold them in our gaze as long as we wish to explore why and how we are so captivated. What could be the message for us?

Steve was born in Mississauga, Ontario in 1966. He is a contemporary realist painter whose home and studio are located in Orangeville, Ontario.
“My figural compositions are derived from photographic fragments of mundane narratives observed in everyday encounters, and I like to reconstruct these fragments in such a way as to make an image that transcends the sum of its parts.
“To me, an effective composition evokes a sense of mystery or tension, irony or drama; it suggests something more profound than is revealed by dissecting its pedestrian origins or simply unraveling the story. The narrative is a vehicle through which I explore allegorical or metaphorical ideas. These ideas, partially established at the outset, are routinely transformed when the collaboration between intellect and intuition is subverted by the demands of the painting itself. The end result, if it is successful, is something that eludes a one-dimensional interpretation.
“Some of my most recent work explores the psychological influences that I encounter during the painting process: In “Self Portrait with Accomplices”, my alter egos participate in an artist-and-model narrative that illustrates this tension between guidance and hindrance – and silencing the inner critic that we all deal with at times.”

Some of his paintings with his illuminating commentary:

The buyer wanted a contemporary Bacchus-themed painting about excess with a voluptuous woman featured prominently. I created a fictitious narrative of a film shoot in Africa where a director and his assistant have set up in a field. In the distance, a worker on an electronic recycling farm tends to a smoky blaze while a young boy (with a sly grin?) acknowledges the decadence before him. The hazy African landscape, thick with smoke and strewn with bits of e-waste provides an effective foil for the foreground setting in which the viewer is, perhaps, a participant more than a witness. I wanted there to be an uncertainty as to whether or not the girl and reclining man are part of a film cast on the sidelines or part of the film-making entourage. The beach sandals lead the viewer into a scene that is disturbing as a result of the starkness of the contrast created between indulgent pleasures and a very disturbing mode of livelihood. 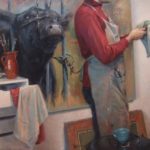 This painting is a sort of self portrait (the guy in red, not the cow). Using the Spanish bullfighting motif, I wanted to create a metaphorical illustration of how paintings need to be tamed or restrained or even conquered – at least that’s how the creative process feels at times. The irony is that both the artist and the canvas on the wall are pictorially bound together as they both appear to be tethered to the steel restraint. The slightly skewed, off-level sensation of the picture adds to this notion that the feeling of being the conqueror is often an illusion. A few fun facts: My wife and I purchased the ceramic vase from Barcelona a few years back; the bull is actually a cow whose picture I took at the Royal Winter Fair last year; I do wear that smock when I paint, but I do not wear the red mock turtleneck. 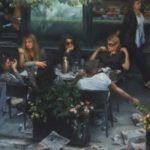 This painting was inspired by a series of photographs taken in Montreal. This group of friends happened to be chatting over brunch when I took a series of pictures from across the street at another restaurant. From the photos, I combined as many of the gestures of disconnection and unconscious preening as I could identify all in one scene. I thought it would be appropriate to put all the ubiquitous mobile devices and smart phones on the ground along with some scattered newspapers. A pall of indifference – and even melancholy – pervades the scene, and the funeral urn I added in the centre of the table could be interpreted as an element of a literal narrative or symbolic of a loss of real human contact. The man at the table turns away and touches a flower as an unconscious means of making contact with nature. The viewpoint of the scene is not consistent with someone standing close to these people but rather from a great distance with a flattened perspective characteristic of telephoto lenses. We seem to be hovering above the ground and, to me, this is a suitable point of view given the subject matter. Fun fact: The right arm on the blonde girl on the right was modelled by my wife; the newspapers were spread across the floor of my office/studio to paint from life.