Charlie Lyon, an accomplished artist living and working on Maui, Hawaii. His paintings are to me meditations on movement. Palm trees and surfing in Hawaii. The trees bowing to the sky, the waves tearing at the earth. The essence of calm and excitement together yet separate, the two become one… The joyous freedom in wind, crashing waves, skies blue and flying wings of palms uplifted as of tall children in ecstasy… 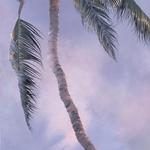 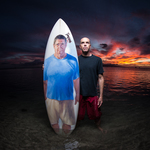 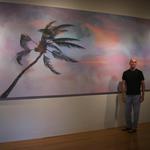 His website: https://www.charlielyon.com
Slideshow and Recordings of my conversations with Charlie:
How Started
Theme and Media
How Evolving
Marketing

Story of An Extraordinary Encounter
Resulting in a Portrait Commission

Charlie Lyon was born and raised in California. He learned to make art as a child. The son of two artists and the youngest of five, he grew up in a household that encouraged creativity. He began his art career in 1979 painting surfboards for Freeline Design in Santa Cruz, California.

His career expanded in the Action Sports Industry to logos, point of purchase displays, T-shirt designs, advertising layouts, and corporate identity projects. He moved to Maui in 1991, and his career led to publishing. He was the art director and writer of the coffee table book “Jaws Maui” and the illustrator for the young adult graphic novel “Surf Clowns”. He got to know Hawaiian watermen and surfing legends, such as Archie Aukai Kalepa, Dave Kalama, Pete Cabrinha, and Hollywood powerhouses, including movie and TV producer Brian Grazer and entertainment promoter Gary Propper. He considered other careers in sports or entertainment, until he realized that one must cultivate one’s own talent and way of life. “I learned a lot by spending time with these gifted people,” he says. “With the extreme athletes, I could see that I didn’t enjoy the same level of excitement. After a couple hours in the water, I was ready to get back into the studio. With the producers and celebrities, I couldn’t stomach the fast-paced business. So I passed on some once-in-a-lifetime opportunities to focus on my fine art.”

He has devoted his work entirely to painting since 2001. He has sold over 180 works in his palm tree series to collectors from around the world including Japan, Hong Kong, Belgium, Australia, Bahrain, Great Britain, Saudi Arabia, Nigeria, and the Stanford University Hospital Collection. Charlie has been included in juried exhibitions such as Art Maui 2007, Schaefer Portrait Challenge 2003 and 2009, The Contemporary Museum at First Hawaiian Center Honolulu – Schaefer Portrait Challenge Exhibit 2009, Haiilemaili General Store Backroom Artists, and The Maui Eleven Exhibit at Cedar Street Gallery in Honolulu. He exhibits year round at the Four Seasons Resort Maui at Wailea on Sundays. His Lahaina studio is open for appointments by calling 808-661-1895.